Americans of the Revolutionary Era regarded the "West" as those lands between the Appalachian Mountains and the Mississippi River. The area beyond the Mississippi was then largely unexplored and in the possession of foreign powers. The West had been the object of much recent contention; Britain and France bitterly struggled for control of the area during the French and Indian War (1754-1763). In the aftermath of that conflict, Britain attempted to halt the westward movement of American settlers in the Proclamation of 1763, one of a series of events that led to the estrangement of mother country and colonies. By the 1780s, seven of the 13 original states had enunciated claims to areas in the West. These so-called "landed" states had a great potential advantage over the six "landless" states. It was assumed that the future sale of western lands would enrich the landed states and possibly allow them to operate without any form of taxation. The landless states feared that they would lose residents and dwindle into insignificance. The claims to the western lands were usually rooted in the vague wording of old colonial charters. The picture was further complicated by the fact that the claims often overlapped one another, which pitted one state's interests against another. As the War of Independence approached its conclusion, the Articles of Confederation government struggled with this problem. Time was of the essence, since thousands of settlers were crossing the mountains into the new areas. The Congress — in one of its few triumphs of this era — worked diligently to induce the states to surrender control of their claims to the central government. The process required nearly 20 years and was completed by the successor government under the new U.S. Constitution. 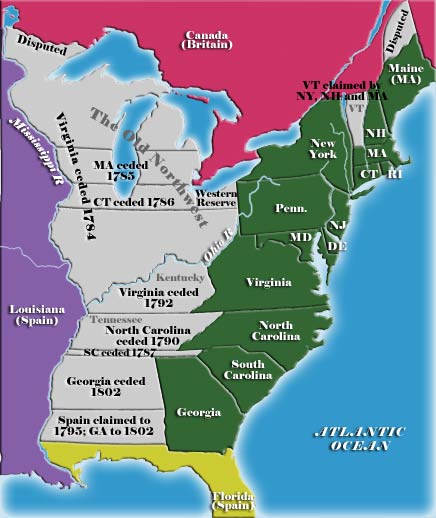 The landed states included the following:

Virginia surrendered its claim to the Northwest in 1784, but held on to the rich lands directly across the mountains until the new federal government was in place. That latter area, Kentucky, became a state in 1792, the same year that Virginia formally vacated its claim.

The ceding of western lands by the states was accompanied by a series of laws passed by the Articles Congress to organize the areas and prepare them for statehood. These measures included the Ordinance of 1784, the Ordinance of 1785, and the Great Northwest Ordinance in 1787. The surrounding territories not controlled by the states or central government belonged at various times to Britain, France, and Spain. These lands changed hands with some frequency in response to diplomatic efforts aimed at settling European wars: See Indian Wars Time Table.