Christopher Columbus, the son of a respected weaver and local politician, was born in Genoa. He worked in his father's business, but chose to go to sea at age 14. Columbus sailed throughout the Mediterranean and one day was shipwrecked off the coast of Portugal. Making his way to Lisbon, he joined a brother and worked as a chart maker.

During the second half of the 15th century, Portugal was the great Western center of explorers and adventurers, and the staging area for the quest to find an ocean path to the East. During his years in Portugal, Columbus heard tales from sailors about lands beyond the known world's western extremity. Educated people of the day recognized that the earth was a sphere, but no European was aware of the existence of the American continents and the Pacific Ocean. Columbus became one of the few voices to call for sailing west to reach the lucrative markets of China and Japan. His idea was given a hearing by the Portuguese king, John II, but royal support was given instead to those seeking to sail eastward around Africa for the same purpose.

Around 1479, Columbus married, but his wife died in 1485. Having failed to gain Portuguese support for a westward exploratory voyage, Columbus moved to Spain with his son Diego. At the time, Spain was a lesser power than Portugal and consumed by a protracted war against the Moors. Nevertheless, Columbus's proposal received a polite reception from the Spanish monarchs, Ferdinand II and Isabella. With the fall of Granada in 1492, Spain was freed to focus its energies on challenging Portugal in trade and exploration. The monarchs agreed to support a westward voyage to China as well as name Columbus "admiral of the ocean seas" and governor of the lands he discovered. For his part, Columbus promised to spread the Christian faith to the people of the East and return with gold, silver, and spices.

First Voyage (1492-93)
The expedition left from Palos, Spain in early August 1492. No soldiers, colonists, or priests accompanied the crew, which attests to the venture's exploratory nature. The Niña, Pinta , and the flagship Santa Maria, sailed first to the Canary Islands, where repairs were made and additional food was taken aboard.

On September 6, the ships headed due west, catching the favorable Canaries Current. Columbus had no charts for the waters he entered. He was distrustful of the existing primitive forms of celestial navigation and depended instead on Dead Reckoning in determining his position.

On October 7, the flotilla's course was changed to the southwest. Landfall occurred on October 12 on a Bahamian island that Columbus named San Salvador. Most authorities believe the landing took place on present-day Watling Island, but the description left by Columbus fits several neighboring islands as well. The explorers believed they had landed on outlying islands of Asia, but were uncertain of whether they had approached India, China (then known to Europeans as Cathay), Japan (Cipango), or Indonesia (the Spice Islands).

Foreshadowing events to come, Columbus noted in his journal that the natives (Arawaks) were a gentle and trusting people who could easily be enslaved for the benefit of Spain.

During the fall of 1492, Columbus hoped to locate the Chinese emperor and explored many parts of the Caribbean. He sighted Cuba and ran the Santa Maria aground off Hispaniola ("La Isla Española"). The crew and all supplies had to be removed from the damaged ship and a small fort was erected on the island. Named Navidad in honor of the Christmas holiday, the small settlement was the first European outpost in the New World since the Norse explorers.

Leaving a portion of his crew on Hispaniola, Columbus caught the Gulf Stream for his return trip to Spain. He managed to present Ferdinand and Isabella with just small gold nuggets and jewelry, but assured them he had found islands on the outskirts of China or Japan. Columbus was well received by the monarchs, who quickly arranged for a more ambitious second voyage. 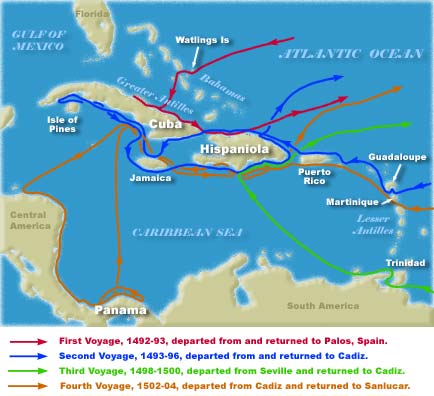 Second Voyage (1493-96)
The expedition that departed from Cádiz in September 1493, was a much more zealous undertaking, comprising 17 ships with officers and crews, 1,500 prospective colonists and a wide variety of livestock. The aims of the venture were clear: to establish colonies and discover gold and silver.

Landfall was made in the Lesser Antilles* in November. The convoy worked its way back to the settlement of Navidad on Hispaniola, where Columbus discovered the fort in ruins and the bodies of some of the colonists in shallow graves; no survivors were found. It is assumed by most historians that friction developed between the natives and the white settlers and the latter were wiped out in battle. A new community was established at a nearby location. Columbus spent much of 1494 exploring other islands, notably Jamaica and southern Cuba. He did not attempt to circumnavigate Cuba and was convinced that it was a part of China.

Conditions at the settlement on Hispaniola became grave during Columbus's absence. Many colonists avoided the hard labor they were unaccustomed to or consumed their time searching for gold. Little effort was expended to improve living conditions or plant crops.

Columbus attempted to restore discipline when he returned, but his attempt alienated many settlers. Columbus was a far better sailor than an administrator. He dealt with the labor issue by caving in to the demands of the colonists who wanted to enslave the natives to augment the work force. Conditions remained dire and many settlers boarded ships for a return to Spain, where they reported their displeasure to the Crown.

In 1496, Columbus left the struggling colony to defend his administration before royal officials. His brothers Bartholomew and Diego were left in charge of the settlement. The second voyage resulted in the establishment of a tenuous colony on Hispaniola and the discovery of little in the way of mineral wealth.

The third voyage departed from Seville in May 1498, with only six ships. The complaints of earlier colonists had taken their toll and Columbus was forced to include convicts among the assemblage. The ships were divided into two groups, one destined immediately for Hispaniola and the other under Columbus to continue the search for China. The exploration party touched land first at Trinidad off the coast of Venezuela, then sailed toward the mainland. A sighting of the Orinoco River mouth convinced Columbus that he was on the shores of a major continent, not another island.

He sailed next for the settlement on Hispaniola, where conditions were persistently chaotic. Complaints to Spanish officials were so frequent that a royal governor was dispatched to the colony in 1500. Columbus was arrested and shipped back to Spain in chains. Ferdinand and Isabella, whose sympathy was waning, spared the explorer from imprisonment, but the height of his influence had clearly passed.

Fourth Voyage (1502-04)
Columbus was not able to mount another venture until May 1502, when he sailed with four ships from Cádiz. His desire to locate China and its wealth was coupled by a need to restore his reputation. Columbus was denied permission to enter the colony at Hispaniola, where he remained a very unpopular figure. He avoided disaster by riding out a hurricane in a small, sheltered harbor, then resumed his quest. His effort was plagued by further storms and doldrums, making his final voyage the most harrowing of all. Columbus sailed along the coast of Central America, hoping in vain to find an opening that would allow him to reach the shores of the Far East.

In December 1502, Columbus attempted to return to Hispaniola. He was ill, losing his eyesight, and his ships were rotting and on the verge of sinking. His one remaining vessel ran aground off of Jamaica, where the entire crew sought refuge.

Two sailors volunteered to make a perilous journey by canoe to Hispaniola to seek rescue for the marooned party. The crewmembers completed their journey, but wary officials waited almost a year before sending aid to Columbus. The "admiral of the ocean seas" knew he was not welcome on Hispaniola and departed immediately for Spain.

Columbus spent most of his remaining days seeking reinstatement of his titles and riches. However, Isabella's death in 1504, removed his most loyal support. After many attempts, he was granted an interview with Ferdinand, in 1505. A generous financial settlement was granted, but the king refused to reinstate his titles. Columbus died in May 1506.

The great explorer was not honored with his name given to the areas he discovered. That honor went instead to a relatively obscure fellow Italian, Amerigo Vespucci.

See background of Spain's Entry into the New World and Columbus's legacy.

*NOTE: The Lesser Antilles are part of an arc-shaped series of islands stretching from the junction of the Caribbean and Gulf of Mexico eastward and southward to the coast of South America. The Greater Antilles include Hispaniola (today the Dominican Republic and Haiti), Puerto Rico, Cuba, and Jamaica. The Lesser Antilles include the Windward and Leeward islands, Trinidad, Tobago, and Barbados. The Antilles and the Bahamas to the north are sometimes known collectively as the West Indies. See map above.