Amerigo Vespucci was a Florentine navigator whose reputation, long in decline, made a remarkable comeback as 20th century historians reevaluated his contributions. 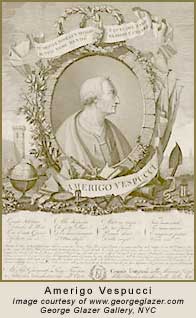 While a young man, Vespucci worked as a commercial agent for the powerful Medici family and represented their interests before the French court. In 1492, he was assigned to Seville, where he became acquainted with Christopher Columbus and aided in the preparations for his second voyage. Historians have been confused about voyages made by Vespucci himself; he left two sets of written reports, one that describes two ventures to the New World, the other four. This situation has led many authorities to dismiss his supposed reports as being simply lifted from others. It is generally believed that Vespucci sailed to the West Indies in 1499, entered the mouth of the Amazon River and sighted the Orinoco River before returning to Spain. A voyage for Portuguese patrons in 1501, during which he claimed to have explored the eastern coast of South America as far south as the Río de la Plata, is doubted by many. Regardless of the number of trips he made across the Atlantic, Vespucci’s reputation rests on the following:

In 1507 Vespucci, then a Spanish citizen, was appointed pilot major — the chief navigator with responsibility for examining and licensing seagoing pilots and masters. This prestigious appointment appears to be proof that Vespucci was highly regarded by his contemporaries. A German cartographer of that day, Martin Waldseemüller, translated some of Vespucci’s writings and applied the name America to what is today the South American continent. Eventually the name was commonly applied to both continents.