During the 15th century, the Iberian Peninsula at the western end of the Mediterranean Sea became the focal point of European efforts to reach the riches of Asia by a sea route, rather than depend on the dangerous, costly and time-consuming ancient trade routes through the Middle East. Tiny Portugal emerged as the original leader of this effort. Lacking a coast on the Mediterranean, it was not surprising that the Portuguese sought a route to the East by rounding the tip of Africa. The most influential figure in the rise of Portuguese maritime strength was Henry the Navigator, who marshaled experts and information to found an empire. Neighboring Spain was slower to respond to the challenge due in large part to disunity. Regional kingdoms vied with one another for supremacy, but sometimes joined forces to confront the Moors (North African Muslims who had occupied portions of Spain since the early 700s). Unification took a major step forward in 1469 when Ferdinand of Aragon married Isabella of Castile; their two kingdoms were formally joined five years later, which provided Spain with the most dynamic monarchy in Europe. The Moorish presence was ended in early 1492, when the stronghold of Granada fell. Ferdinand and Isabella, known as the Catholic kings, celebrated the victory in part by expelling the Jews from Spain. This move earned high marks from the pope, but dealt a severe economic blow to the nation. The defeat of the Moors also freed the monarchs to support exploratory ventures, including those of Christopher Columbus. The four voyages of Columbus (between 1492 and 1504) served to open the door to European exploration, colonization and exploitation of the New World, although Columbus himself never set foot in North America. By the time the English began active colonization, the Spanish had already explored large portions of North America, especially in the South and Southwest. 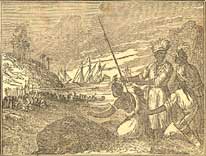 The Spanish explorers encountered three major civilizations in the New World: the Incas in present-day Peru and the Mayans and Aztecs in Mexico and Central America. The conquistadors were truly amazed by what they found — immense wealth in gold and silver, complex cities rivaling or surpassing those in Europe, and remarkable artistic and scientific achievements. Spanish conquest in the New World was driven by the three `G`s—gold, glory, and gospel. In his drive to gather riches, Columbus (and later conquistadors) enslaved and decimated the local populations. The numbers of these Native Americans plummeted, in part because of war against the colonial forces, but also because of the introduction of diseases to which the natives had no natural immunity. The natives contracted malaria, Smallpox and measles from the Europeans, but passed on syphilis to the invaders in a morbid exchange. In 1494, shortly after Columbus’ first voyage, the pope divided the newly discovered lands between Spain and Portugal — both Catholic nations, but fierce rivals. The line of demarcation crossed through the hump of South America. Spain was to have the lands to the west and Portugal those to the east (accounting for the use of the Portuguese language in Brazil today). The most profitable Spanish activities in the New World occurred in the southern portions, while less rewarding ventures took place in northern areas.