Original Inhabitants At the time of the first appearance of Europeans in what today is Montana, there were native inhabitants living in two geographical regions. In the plains area in the east, the Arapaho, Assiniboine, Blackfoot, Crow and Gros Ventre developed life styles revolving around the bison — their major source of food, clothing and shelter. In the valleys near the Rocky and Bitterroot mountains to the west, the Bannock, Kalispel, Kootenai and Shoshone found their homelands more conducive to agriculture. Other tribes frequently spent a portion of the year in Montana, including the Cheyenne, Mandan, Nez Percé and Sioux. The Early Europeans French fur traders and trappers may have ventured into present-day Montana in the 1740s, but the evidence is not conclusive. Nonetheless, the area between the Mississippi River and the Rocky Mountains was claimed by France and named Louisiana. French authority in the area was weakened by defeat in the French and Indian War and they compensated Spain, their ally in that conflict, by passing title to Louisiana to them. France temporarily regained control of the region during the Napoleonic Era, but in 1803 sold it to the United States in the Louisiana Purchase. Explorers. President Thomas Jefferson`s curiosity about the newly purchased tract led to his support for an exploratory venture, fueled largely by the hope of discovering an easy water route that would lead to the Pacific Ocean. The Lewis and Clark Expedition set off in 1804 and reached the Forks of the Missouri River in present-day Montana the following July. The party again entered Montana on the return trip, splitting into northern and southern contingents in order to see more territory. The reports of Lewis and Clark at journey`s end were largely responsible for sparking interest in Louisiana, particularly in its abundance of fur-bearing animals. 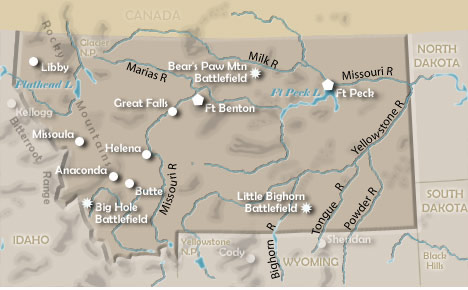