Jim Crow Laws were statutes and ordinances established between 1874 and 1975 to separate the white and black races in the American South. In theory, it was to create "separate but equal" treatment, but in practice Jim Crow Laws condemned black citizens to inferior treatment and facilities. Education was segregated as were public facilities such as hotels and restaurants under Jim Crow Laws. In fact, the United States military was segregated until integrated by Harry S. Truman after World War II. The term "Jim Crow" originally referred to a black character in an old song, and was the name of a popular dance in the 1820s. Around 1828, Thomas "Daddy" Rice developed a routine in which he blacked his face, dressed in old clothes, and sang and danced in imitation of an old and decrepit black man. Rice published the words to the song, "Jump, Jim Crow," in 1830. Beginning in the 1880s, the term "Jim Crow" saw wide usage as a reference to practices, laws or institutions that arise from or sanction, the physical separation of black people from white people. Jim Crow laws in various states required the segregation of races in such common areas as restaurants and theaters. The "separate but equal" standard established by the Supreme Court in Plessy v. Ferguson (1896) lent high judicial support to segregation. A Montgomery, Alabama, ordinance compelled black residents to take seats apart from whites on municipal buses. At the time, the "separate but equal" standard applied, but the actual separation practiced by the Montgomery City Lines was hardly equal. Montgomery bus operators were supposed to separate their coaches into two sections: whites up front and blacks in back. As more whites boarded, the white section was assumed to extend toward the back. On paper, the bus company's policy was that the middle of the bus became the limit if all the seats farther back were occupied. Nevertheless, that was not the everyday reality. During the early 1950s, a white person never had to stand on a Montgomery bus. In addition, it frequently occurred that blacks boarding the bus were forced to stand in the back if all seats were taken there, even if seats were available in the white section. 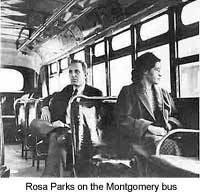 Thanks to the brave obstinance of a few black persons, notably Rosa Parks, things began to change and Jim Crow Laws were challenged. On December 1, 1955, Parks wearily refused to relinquish her seat to a white man. She was arrested, fingerprinted, and incarcerated. When Parks agreed to have her case contested, it became a cause célèbre in the fight against Jim Crow laws. Numerous historians agree that Parks' trial*, followed by a nearly 32-month Montgomery bus boycott — and the Supreme Court's November 1956 ruling declaring the unconstitutionality of segregation on public transportation — marked the birth of the modern civil rights movement. By the 1960s, other Supreme Court decisions, and the Civil Rights Act of 1964, invalidated the majority of Jim Crow laws.

*Parks was fined for failing to obey a city ordinance. However, she followed the advice of her attorneys and refused to pay it, to allow them to challenge the segregation law in court.