Original Inhabitants Evidence of human activity in present-day Idaho dates to 12,000 years ago, when migratory big game hunters pursued bison and mammoth, leaving remains behind at campsites. By the time of the coming of the Europeans at the beginning of the 19th century, native groups occupied three areas in Idaho. The northern panhandle area was home to the Coeur d`Alene, Kootenai, and Pend d`Oreille. Western areas ranging into today`s eastern Oregon were inhabited by the Nez Percé. The Shoshone, Bannock, and Paiute were fairly recent inhabitants of the prairies of southern Idaho, having migrated northward from their previous homelands. The Shoshone and Nez Percé were the most numerous and the former were the first to adapt the horse into their lifestyle, which increased their mobility and hunting effectiveness. Early contact with the whites also introduced Smallpox, a disease against which the natives had no immunities. The Early Europeans Fur Traders President Thomas Jefferson in 1804 dispatched Meriwether Lewis and William Clark to explore the newly obtained Louisiana Purchase. The explorers tried and failed to find an easy water route across the continent to the Pacific Ocean. In 1805, the party crossed over the Bitterroot Mountains into what became Idaho. Aided by natives, they constructed canoes and followed the Clearwater and Snake rivers to the Columbia and then on to the Pacific. In 1809, Canadian David Thompson, hired by the North West Company, established a trading post beside Lake Pend Oreille, the first such venture in the Northwest. He was followed the next year by an ambitious American, Andrew Henry, who built a post for the Missouri Fur Company near present-day Rexburg. In 1811, Donald Mackenzie and Wilson Price Hunt entered the Idaho area and made an unsuccessful attempt to float down the Snake River on canoes, later resorting to an overland route around the treacherous rapids. After surviving a brutal winter, the party pressed on to the Columbia and eventually to Fort Astoria. Parts of this route were later incorporated into the Oregon Trail. By the end of the War of 1812, Britain and the United States were the major claimants to the Northwest. A decision was made to defer determination of ultimate ownership of the area and the two nations agreed to joint occupation in 1818 for a period of 10 years. In 1819, the southern boundary of present-day Idaho and Oregon was set at 42º north latitude in a treaty with Spain. The North West Company was absorbed into the Hudson`s Bay Company in 1821. This powerful enterprise exerted vast influence throughout what was commonly call the Oregon Country and clashed frequently with "mountain men", whose roots were in the U.S. In 1825, General Henry W. Ashley changed the nature of the fur trade by establishing the rendezvous system. Instead of maintaining permanent posts or depots, Ashley arranged to meet Indian trappers and mountain men on an annual basis at predetermined locations. This form of trade flourished for a decade, but faded after the construction of two major forts in 1834 — Fort Hall, the product of Boston trader Nathaniel Wyeth and Fort Boise, built by the Hudson`s Bay Company. The Canadian venture bought out the Americans in 1836, but by the 1840s, the animal population in the area had been depleted, and the fur trade plunged into decline. Missionaries. In 1836, Henry and Eliza Spaulding, a Presbyterian couple, established the Lapwai Mission near present-day Lewiston to serve the needs of the Nez Percé. Among many achievements, these missionaries introduced irrigated agriculture and raised the area`s first potatoes. In the early 1840s, a Roman Catholic mission was established for the Coeur d`Alene to the north. Mormon settlers established Fort Lemhi in 1855, but continuing friction with the surrounding natives forced the evacuation of the position. A permanent Mormon presence was set in the community of Franklin in 1860. Farmers. The 1840s was the decade of the Great Migration across the Oregon Trail. Tens of thousands of white settlers passed through Idaho, but only small numbers remained there. The harsh climate, the area`s remote location and the hostility of many Indian tribes accounted for the decision of most of these pioneers to press on to more inviting surroundings. The Territorial Years The longstanding dispute between the United States and Britain over the ownership of the Oregon Country was ended by treaty in 1846, when both nations agreed to setting the international boundary at the 49th parallel in the region from the Rocky Mountains westward to the Pacific Ocean. This settlement provided a northern boundary for the area that would become Idaho. In 1853, Congress assigned the northern portion of today`s Idaho to the new Washington Territory and the southern area continued under the control of the Oregon Territory. When Oregon achieved statehood in 1859, southern Idaho was taken into the Washington Territory.

Interest in the Idaho area was heightened during the territorial era by a number of gold strikes. There was a minor one in 1852, followed by a series of more important ones a few years later — along the Clearwater River in 1860, the Salmon River in 1861, the Boise River in 1862, and gold and silver strikes near the Owyhee River, in 1863. Some of the prospectors came overland from the East, but most traveled by steamboat up the Columbia River. Boomtowns burst onto the scene at Idaho City, Silver City and Florence, and the population of the area climbed to more than 20,000. This increase in number led to calls for more accessible government and also generated much friction with the resident Indian tribes, which resented intrusions on their homelands. In March 1863, the Idaho Territory was established by Congress, including the areas that today are Montana and Wyoming. Lewiston was designated as the territorial capital and William M. Wallace the first governor. The following year, the remote area of Montana was separated from Idaho and the capital was moved to Boise. In 1868, Wyoming was similarly separated, thus establishing the borders of present-day Idaho. Indian Warfare In 1853, Isaac Stevens was the governor of the Washington Territory (then including Idaho). He pressed for the negotiation of a series of treaties with native residents of the area for the purpose of securing additional lands for white settlement. The Indians were given or promised financial compensation in return for relocating on more remote and less desirable reservation sites. This arrangement never worked well and caused much bitterness. This situation worsened as more whites entered the area and began occupying lands supposedly reserved for the natives. This was a particular problem for the Nez Percé whose treaty lands occupied parts of present-day Idaho, Washington, and Oregon. Repeated violations of their territory led to the signing of an unpopular treaty in 1863, that severely reduced the size of their reservation and caused great resentment. Armed clashes with whites involving various tribes occurred throughout the area: 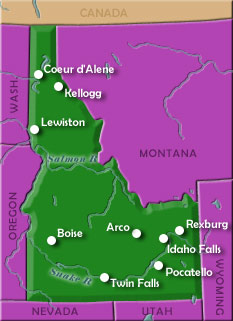 The cattle industry came to prominence in Idaho in the 1860s. Herds were driven into the area from the south to feed gold prospectors. The cattlemen, many of them from Texas, soon discovered the area`s alluring grazing lands and put down roots. Sheepherders soon followed, including a large community of Basques from northern Spain. Tensions between the two groups often led to violence. The increasing population of the Idaho Territory made the area attractive to railroad interests. In 1874, the Utah Northern ran a line into the Mormon community of Franklin. Other small local efforts followed, but a gold strike in the Coeur d`Alene area in 1882, brought in thousands of prospectors; the strike turned out to be modest, but in the process extremely rich silver deposits were discovered. Hoping to serve the needs of the miners, a spur from the Union Pacific crossed southern Idaho in 1884, and the Northern Pacific served the northern part of the territory. Some thought was given to dividing the Idaho Territory during the 1880s. It seemed sensible to many to assign the narrow northern panhandle to Washington and the larger southern portion of Nevada. Congress acted on this idea, but the territorial governor managed to convince President Grover Cleveland that he should withhold his support. In 1889, a constitution was prepared by a territorial convention and Idaho entered the Union as the 43rd state on July 3, 1890. George L. Shoup governed the new state`s 88,000 citizens. Idaho was thoroughly enmeshed in the political and economic issues of the 1890s. Declining farm prices that followed the Panic of 1893, found many eager adherents to quick-fix solutions. The most popular in Idaho was the free silver movement that held out the hope of prosperity for the state`s farmers and silver miners. The Populist Party enjoyed brief election success in 1896, but failed to effect meaningful change. The 1890s also saw the development of organized labor in the notoriously dangerous mining industry. Unions strove for higher wages and better working conditions; owners often fired union members and brought in strikebreakers. Violence erupted from a strike at a mine near Wallace in 1892; the governor sought to restore order by declaring martial law and calling for federal soldiers. A similar event occurred at the Bunker and Sullivan lead mine in 1899. Governor Frank Steunenberg`s call for federal soldiers angered many of the strikers. Later, in 1905, the former governor was killed by a bomb attached to the front gate at his home. Harry Orchard, a member of the Western Federation of Miners, confessed to the murder, but implicated the leadership of the Industrial Workers of the World (IWW) in the planning of the crime. The 1907 trial of William `Big Bill" Haywood and two others was international news. William E. Borah was at the beginning of his long career and served as a prosecutor. Clarence Darrow, the famed defense attorney, helped gain the acquittal of the union defendants. Perhaps the most important change at the turn of the century in Idaho was development of irrigation projects along the Snake River. Federal assistance through the Carey Act (1894) made public lands available to states willing to pursue programs of irrigation, reclamation, settlement and cultivation. Further help came in the National Reclamation Act (or the Newlands Act of 1902) that earmarked proceeds from the sale of Western public lands for irrigation projects. In later years, water was diverted from the Snake at Twin Falls (1905) that irrigated more than 50,000 acres and the completion of the Minidoka Dam (1906) enabled an additional 100,000 acres to become productive. Potatoes and sugar beets became increasingly important parts of the Idaho economy. The timber industry had benefited immensely from access to transcontinental railway lines. However, a severe blow was delivered in 1910, when a series of forest fires hit the northern regions of Idaho. It was estimated that about one-sixth to the timber crop was destroyed. The Era of the World Wars The beginning of American participation in World War I in 1917, conditions improved markedly for Idaho farmers. The ready markets for their produce raised farm prices, but wartime inflation reduced the purchasing power of many. Postwar conditions were often grim. Farmers were geared up for high production, but worldwide demand was answered in part by the resumption of European production. Farmers in Idaho and elsewhere were again plagued by oversupply and low prices. The population of the state declined for a period in the 1920s as people left farming for other types of work. Even worse conditions prevailed in the Depression years of the 1930s; low prices continued despite the new element of prolonged drought. Some of Franklin Roosevelt`s New Deal programs provided a lifeline to some Idaho residents: Idaho was also the site of the internment of thousands of Japanese-American citizens who were removed from Oregon and Washington as perceived security threats. Recent Events Recent events of note include the following: