Exploration and Settlement of Georgia

In 1540, the Spanish explorer Hernando De Soto was probably the first European to explore what is today Georgia. The French made a brief appearance at this time, but were quickly expelled by Spanish forces from Florida. In 1566, the Spanish established a fort on St. Catherines Island, south of present-day Savannah, the first of a series of fortified positions along the coast. This region was known to the Spanish as Guale. In 1663, England reasserted an earlier claim to the area when Charles II granted rights in greater Carolina to the eight “lords proprietor.” In 1670, the new owners established a settlement at Charles Town in present-day South Carolina. Ten years later, they managed to dislodge the Spanish from St. Catherines Island. Although the Spanish power center had retreated into Florida, a bloody contest with the English continued for decades. 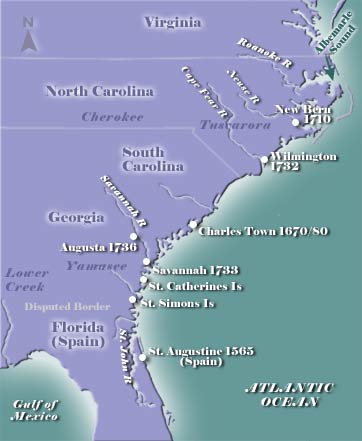 In 1732, George II granted the lands between the Savannah and Altamaha rivers to General James Oglethorpe and a group of other trustees; in gratitude, the trustees named the colony after the king. In recent years, proprietary colonies had been largely unsuccessful, which led to a modified form of proprietorship. Under this arrangement, the trustees were not permitted to make a profit from the venture and the charter was to be returned to the Crown after 21 years. Motivation for the new venture included the Crown’s desire to maintain a buffer between South Carolina, one of the most prosperous English colonies, and the Spanish to the south. The trustees, for their part, hoped to found a colony that would provide a second chance for debtors, and sought to promote hard work by outlawing slavery and liquor. To support stability in the colony, the purchase or sale of land was prohibited - land speculators had caused problems in other areas and were not welcome in Georgia. The trustees also hoped that Georgia could be a source of silk and in the early years required the settlers to plant mulberry trees. However, the silk worms never thrived. In early 1733, Oglethorpe and a group of settlers arrived at the present site of Savannah. Three years later, another settlement was established at Augusta, inland on the Savannah River. Persistently tense relations with the Spanish culminated in the Battle of Bloody Marsh on St. Simons Island in 1742. Oglethorpe's victory marked the end of the Spanish threat in Georgia. In 1752, the Georgia trustees surrendered their charter, having established a generally successful colony of middle- and small-sized farms. However, Oglethorpe regarded the venture as a failure. The population remained small and weak. Few debtors were brought to the colony, but slavery and alcohol became commonplace. The prosperous examples of the colonies to the north influenced Georgia to rescind its prohibition on slavery, which signaled the start of a plantation society dominated by rice, Indigo, and slave labor. Royal colonial status was created in 1754. Despite its weakness, Georgia was a valuable part of the British Empire and was home to a large and vocal Loyalist population on the eve of the War of Independence.