As diplomat, scientist, writer, printer and political philosopher, Benjamin Franklin was one of the truly dominant figures of the 18th century. Born on January 17, 1706, into a large family in Boston, Benjamin Franklin experienced little formal schooling and was apprenticed to a half-brother to learn the printing trade. So intent was Franklin with educating himself, he became a vegetarian in order to save money to purchase books. He moved to Philadelphia, lived briefly in London and then returned to Philadelphia in 1726, where he began a steady rise to fame and fortune. He published the Pennsylvania Gazette, established a lending library and a fire-fighting company, served in government posts and was the author of Poor Richard`s Almanac, a collection of Franklin`s pithy observations that became American proverbs. One of Franklin`s habits was to fill the space in his newspaper as needed with writings which he sometimes pretended were from someone else. One of these was the "Advice to a Young Man on the Choice of a Mistress," which appeared in 1745. Another was a report of the "Speech of Polly Baker," at her trial in Connecticut on the charge of having given birth to her fifth bastard child. It didn`t matter that there was no trial, no Polly Baker, and no law against having bastard children in Connecticut. 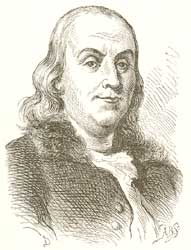 The American Philosophical Society was founded by Benjamin Franklin in 1743 and is the oldest learned society in America. Established for the "promotion of useful knowledge among the British plantations in America," its membership has included the leading scientists, scholars, public servants and statesmen of this country as well as abroad. Membership is limited to 500 American members and 100 international. Also in that year, Franklin proposed the Academy of Phildelphia, which opened in 1751. The Academy was organized into Latin, English, and Mathematical departments, with the Latin department developing into the University of Pennsylvania. Having established his fortune by 1750, Franklin turned his attentions to science and political matters. His experimentation with electricity gained him recognition in Europe as well as in America. He also developed such everyday items as bifocal glasses, the lightning rod and the Franklin stove. The bifocals were developed for his personal use. Some debate has taken place as to the first inventor, and it seems that others may have devised bifocals independently, but writings and paintings support the idea that Franklin came up with bifocals before anyone else. Lightning rods were devised by Franklin as a means to safeguard buildings. His observations of electrical phenomena convinced him that a sharp point would serve the purpose best. Others believed that blunt ends would work better, as they would not be as likely to draw a strike. George III chose the blunt design for his palace. When the colonies needed lightning rods, they favored Franklin`s sharp points, which may have been partly a political statement. The Franklin stove was originally known as the Pennsylvania Fireplace. It was a cast-iron fireplace that used metal baffles to increase efficiency. The modern versions include an improvement suggested by David Rittenhouse in 1772, which was the addition of an L-shaped chimney. In the political realm, he served as the colonial deputy postmaster and represented Pennsylvania`s interests in England in a dispute with the Penn family. While not serving in the French and Indian War, Franklin expended great effort to support General Braddock`s march into western Pennsylvania. He also served as the colonial agent for Georgia, Massachusetts and New Jersey. At the Albany Congress in 1754, Franklin was the originator of what became known as the "Albany Plan," which called for a voluntary union of the colonies with "one general government," each colony retaining its separate existence and government. Although the plan gained the approval of the delegates, it was rejected by the colonies as giving too much to the royal power, and in England it was rejected to giving too little. "The different and contrary reasons of dislike to my plan made me suspect that it was the true medium," he wrote later. Explaining the advantages of his plan to William Shirley, the royal governor of Massachusetts, Franklin explained:

I think, too, that the government of the colonies by a Parliament in which they are fairly represented would be vastly more agreeable to the people than the method lately attempted to be introduced by royal instructions, as well as more agreeable to the nature of an English constitution and to English liberty; and that such laws as now seem to bear hard on the colonies would (when judged by such a Parliament for the best interest of the whole) be more cheerfully submitted to and more easily executed.

In 1757, the Pennsylvania Assembly sent Franklin to London to negotiate for relief from the proprietary control exercised by the Penn family. He remained in England for extended periods until 1775, when the increase in revolutionary feeling in America made his position there untenable. During the early part of the French and Indian War, the British were not particularly interested in acquiring Canada from the French. Franklin and others argued that it would benefit both England`s status as a world power and the security of the colonies. Along with Richard Jackson, he wrote a pamphlet in 1760 entitled, "Great Britain`s Interest in Her Colonies," in which he stressed these points. The pamphlet may have contributed to Britain`s decision to keep Canada in the peace treaty that followed. Franklin spend most of twenty years in England, representing the interests of various colonies. Eventually, he grew disillusioned with the British government and came to the belief that the colonies would be better served without its interference. A measure of his disenchantment can be seen in Rules by Which a Great Empire May Be reduced to a Small One, which appeared in London in 1773:

6. However peaceably your Colonies have submitted to your Government, shewn their Affection to your Interest, and patiently borne their Grievances, you are to suppose them always inclined to revolt, and treat them accordingly. Quarter Troops among them, who by their Insolence may provoke the rising of Mobs, and by their Bullets and Bayonets suppress them. By this Means, like the Husband who uses his Wife ill from Suspicion, you may in Time convert your Suspicions into Realities.

This and the other nineteen pointed jabs at British attitudes did nothing to endear him to the governing class, so that the dislike became strong and mutual. Franklin returned to America shortly before hostilities broke out in 1775. He served in the Second Continental Congress and was a drafter and signer of the Declaration of Independence. Franklin`s illegitimate son, William, became a Loyalist; father and son never reconciled. In 1776, Franklin was part of a delegation that included also Silas Deane and Arthur Lee that was sent to France for the purpose of securing aid and succeeded in winning recognition. The French waited and watched to see whether the colonies were likely to win. When General Burgoyne surrendered at Saratoga in early 1778, the prospects brightened considerably and French recognition came quickly. In 1781, Franklin went to London with John Jay and John Adams to begin negotiations for the conclusion of the War for Independence. Benjamin Franklin returned to America in 1785 and two years later attended the Constitutional Convention. Advanced age limited his role, but Franklin threw his considerable prestige behind ratification despite serious reservations about portions of the final document. Franklin`s autobiography, covering only his early years, is regarded as one of the finest examples of the genre. After the death of his wife Deborah, the Franklin lived with his the family of his daughter Sarah, who cared for him as his health weakened. Benjamin Franklin died peacefully in his sleep on April 17, 1790, at the age or 84. His funeral in Philadelphia attracted an estimated 20,000 people, who crowded around the Christ Church Burial Ground where he was buried beside his wife. When settlers in what later became Tennessee were dissatisfied with their dependence on North Carolina in 1784, they formed the State of Franklin, named in honor of Benjamin Franklin. It provided local government services in the area for four years. When statehood came in 1796, it was with the name Tennessee. Quotes by Benjamin Franklin: "We must hang together, gentlemen...else, we shall most assuredly hang separately." (at the signing of the Declaration of Independence) "George Washington -- the Joshua, who commanded the sun and the moon to stand still, and they obeyed him." (This toast was given at an official dinner, after the British ambassador proposed: "England -- the sun -- whose bright beams enlighten and fructify the remotest corners of the earth." The French ambassador proposed: "France -- the moon -- whose mild, steady, and cheering rays are the delight of all nations, consoling them in darkness." Franklin then proposed the toast to Washington.)