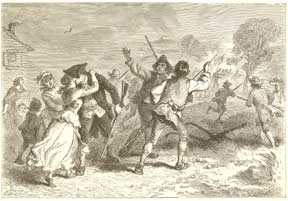 The town of Concord, Massachusetts, was alerted to the advance of British forces by Dr. Samuel Prescott shortly after midnight on April 19. Church bells rang out the alarm, summoning Minutemen from the vicinity. By the early morning hours, several hundred men had gathered in the town and began a slow march toward the oncoming redcoats, who had easily scattered the militia in Lexington. However, when the Americans first sighted the British advance force, they abruptly reversed direction and retreated to a hilltop outside of town.

By 7:30 a.m., the British force entered Concord intent on two objectives: destroying weapons and eating breakfast. A local man was forced at gunpoint to reveal where the town cannon had been buried a few hours earlier. It was quickly unearthed and disabled. Other redcoats searched homes in the town for arms and purchased food from reluctant residents.

The nearby militia had grown to a force of more than 400 men. From their vantage point, they saw smoke billowing from the town and assumed that their homes had been torched. In fact, the British had simply built a bonfire to dispose of some military equipment and the local liberty pole.

The militia left their hilltop retreat and moved back toward town. On the way, they confronted a contingent of British forces at the North Bridge over the Concord River. Several shots rang out from uncertain sources. No one fell and some of the militiamen assumed that the redcoats were simply trying to intimidate them, and that they had no intention of opening fire. That illusion was quickly shattered when a crackling volley was loosed from the British side. Two Americans were killed, and the fire was promptly returned. The British ranks broke and the soldiers hurried back to Concord where they waited until noon for reinforcements from Boston. The anticipated relief had not departed from the city until 9 a.m. and was still miles away. The British decision to leave Concord without reinforcements at first appeared to be wise. The American militiamen initially stood silently and watched the departure, but later the local men began to take positions behind trees and fences and pour fire into the departing army. The church bells continued their tolling and increasing numbers of farmers and workmen left their tasks to join the rout. The British were outraged by the American tactics, believing that real soldiers would confront their enemies in the open. Instead, the colonists opened fire from hidden positions as the army passed, then sprinted ahead to another protected spot and repeat the process. The tired and angry British soldiers broke into houses along the path of retreat. Any man remotely suspected of being one of the snipers was shot and his house burned.

British prospects improved somewhat in Lexington, where they finally linked up with the relief forces. Two cannons had been brought from Boston and were used with some effect on the march back. Nevertheless, sniper attacks dogged the British to the city outskirts. At the end of the day, American militiamen began to encircle their opponents and started preparations for a siege.

One of the day’s heroes was Dr. Joseph Warren, the Patriot leader, who risked his life repeatedly while tending the wounded and dying. The fighting at Lexington, Concord, and along the road back to Boston, had negligible long-range military consequences. The British suffered horribly, sustaining 73 killed, 174 wounded, and 26 missing. The Americans listed 49 killed, 39 wounded and five as missing. The colonists, however, received a tremendous boost in morale by embarrassing the vaunted British army.