In 1584, Sir Walter Raleigh hired navigators Philip Amadas and Arthur Barlowe to head an exploratory venture to the New World. It was originally intended that a settlement be made in the Chesapeake Bay area since it enjoyed milder weather than the more northerly regions, while still being outside the orbit of the Spanish in Florida.

Despite their primary interest in locating mineral riches, a favorable report was brought back to Raleigh. Amadas and Barlowe endorsed Roanoke Island, a three-mile strip of land off the coast of present-day North Carolina and south of Albemarle Sound, as a likely site for a colony. Raleigh then sought and received a royal land grant from Queen Elizabeth I. 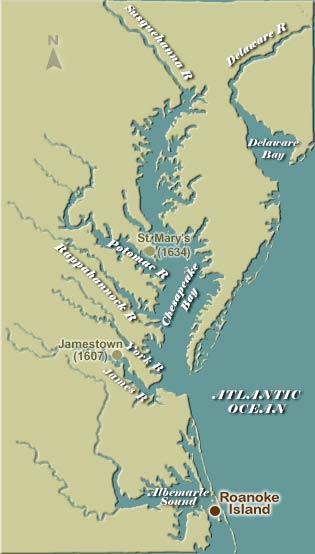 An optimistic Raleigh sent a second expedition to the New World in 1585, headed by Sir Richard Grenville and Sir Ralph Lane. Raleigh named the new colony Virginia, in honor of his benefactor, the Virgin Queen. A small settlement was planted, but the dispirited colonists returned to England the following year.

Raleighs last and most ambitious undertaking was made in 1587. John White headed this venture and was dedicated to establishing a self-sufficient colony, rather than a center for locating gold and silver. The new settlers planted crops, erected shelters and in August the first English child born in the New World (Virginia Dare) was delivered. Expedition leader White sailed back to England for additional supplies, but because of growing warfare with Spain (see Spanish Armada) was unable to return for three years.

When he did, White found no trace of the settlers; the entire colony of 117 men, women and children had vanished. The only clues to their disappearance were the letters "CRO" carved on a tree near the fort and the word "Croatoan" on a post.

Many theories exist about the settlers` fate on Roanoke Island, but none has been fully substantiated. One view is that the colonists sought refuge with neighboring Native Americans (probably the Coharie tribe) and were absorbed through intermarriage. Others have argued that the settlers were wiped out by an attack from Native Americans or by an unusually violent storm. Recent scientific studies involving tree ring growth analysis indicate the existence of a severe drought at that time -- the worst in hundreds of years.

In any event, the first significant English effort to establish a colony in North America ended in mysterious failure.