By the mid-1580s, Philip II of Spain had reached the end of his rope. His courtship of Elizabeth I of England had been rebuffed and the rivalry between the two nations had developed to a war-like status. Philip began preparations in 1586 for an invasion of England, hoping to accomplish three goals: 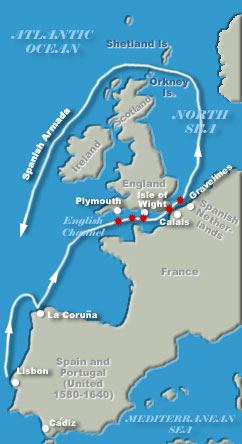 However, Spain's construction of the "Invincible Armada" was dealt a serious blow in 1587, when Drake launched a preemptive strike against the fleet in its home port of Cádiz. This surprise attack probably delayed the Armada by a year and provided additional time for the preparation of English defenses. By May 1588, a force of nearly 30,000 men had been gathered on 130 ships. They set sail from Lisbon, but were soon halted by adverse weather conditions and forced to put in to La Coruña. The regrouped Armada set out again in July with the first order of business being the collection of additional soldiers from the Netherlands. The Spanish ships entering the English Channel were under orders to avoid conflict with enemy vessels until the new soldier were on board. However, the faster and more maneuverable English ships under the command of Charles Howard launched a series of long-range attacks. Battles were fought for a week off Plymouth and the Isle of Wight; none was decisive. The Spanish fleet then anchored in the waters off Calais and attempted to link up with the soldiers on shore. In a masterstroke, the English sent a small fleet of unmanned old ships, coated with tar and filled with gunpowder, into the midst of the Spanish navy at anchor. The resulting explosions inflicted heavy damage on the invading Armada and scattered many of the vessels that had escaped harm. The English followed up with a coordinated attack, known as the battle of Gravelines. The Spanish effort to escape from the Channel by sailing west into the Atlantic was thwarted by strong headwinds, later dubbed the "Protestant Wind." Instead, the Armada was forced to sail into the North Sea and to round Scotland in order to reach the Atlantic. This passage took a further toll on the Spanish fleet as storms continued to impede its progress and provisions ran low. A number of ships foundered on the return voyage; the sailors and soldiers who washed up on the western shores of Ireland were slaughtered on the beaches by English forces. Only 67 of the original 130 ships returned to Spain and as many as 15,000 men perished. The defeat of the Spanish Armada did not automatically make England the dominant power of the western world. Spain would remain a great force in European affairs for years to come and would be able to continue its war against England into the next century. Nevertheless, changes were afoot: