In 1713, the French established a colony on the eastern side of Cape Breton Island in northern Nova Scotia. The administrative center was called Louisbourg in honor of King Louis XIV and had the great advantage of being located on an ice-free harbor. A fortress of the same name was constructed (1720-40) to protect against enemy incursions into the Gulf of St. Lawrence. In 1745, as part of King George's War (or the War of the Austrian Succession in Europe), Louisbourg was successfully attacked by English colonial forces under William Pepperrell and a royal naval contingent under Peter Warren. Louisbourg was of particular concern to New England shipping and fishing interests, since it served as the base for French privateers. Much to the colonists' chagrin, the fortress was returned to the French under the terms of the Treaty of Aix-la-Chapelle (1748). Many American colonists, while still proud subjects of the king, were outraged when their greatest military conquest was negated by the stroke of a pen in a faraway land. The Siege of Louisbourg The colonial rivalry between France and Britain continued into the next decade. It final chapter occurred in the Franch and Indian War and the fortress at Louisbourg was again a facal point. In 1758, the French garrison at Louisbourg was manned by only 3,000 men. Those forces were supplemented in the early spring by the arrival of five ships, which were assigned the task of protecting the harbor from an expected British assault. French concerns were well founded. A 12,000-man British army was en route under Jeffrey Amherst. The soldiers were carried on 120 transport ships and were supported by a naval squadron under the command of Admiral Edward Boscawen. 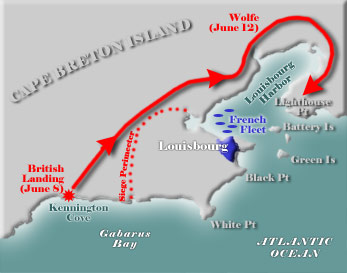 A landing was undertaken on June 8 in a small cove to the west of the fortress. Conditions were extremely hazardous — the seas were rough and the French held a position on the cliffs above. Despite early setbacks, the British were able to get their soldiers ashore due in a large part to the planning and drive exhibited by James Wolfe. In the following weeks the British extended their control in an arc across the land area to the west of Louisbourg and initiated a siege. On June 12, to further enhance the British position, Wolfe led a 1,200-man force through a thick fog to Lighthouse Point, an undefended promontory across the harbor from the fort. From this point the British guns could command Battery Island — the French outpost that guarded the entrance to the harbor. The presence of British firepower on Lighthouse Point forced the French to move their ships out of range and closer to shore. This move soon had the unfortunate consequence of placing the vessels within range of the shore-base British artillery as the siege line tightened to within 200 yards of the city. Three of the ships were destroyed by artillery on July 21 and the other two fell to a surprise raiding party four days later. The siege had taken a heavy toll on the French soldiers and civilians within the fort. The commander had no reasonable expectation of relief and surrendered on July 27. The fall of Louisbourg was a pivotal event in the war, giving the British control of the mouth of the St. Lawrence River and opening the door to the fateful Quebec campaign of the following year. News of this British victory followed closely on the heels of the reports from forts Duquesne and Frontenac, and indicated a sharp change in the fortunes of the war. See Louisbourg regional map.
See also French and Indian War Timeline.
Also Indian Wars Time Table.