British Major General William Howe had pulled his soldiers out of New Jersey in the spring of 1777, having failed to lure George Washington into a open-field encounter. The reassignment of the British troops to Staten Island was only temporary, however. These forces were to serve as one prong in a larger three-pronged attack — the major component of the British war plan for the year. Howe’s army was to move northward from Manhattan and converge on Albany with the armies of St. Leger on the Mohawk and Burgoyne from Lake Champlain, effectively splitting New England from the other colonies. 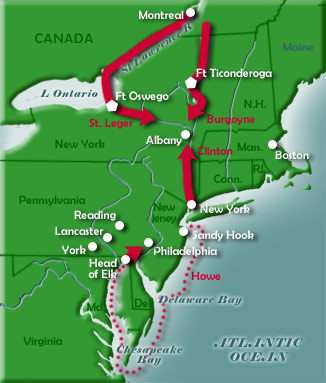 Prior to participating in that joint-venture, however, Howe did some tinkering with the war plan. He chose to interpret his orders from London as authorizing him to strike first against the American capital city, Philadelphia. He believed that the large Loyalist population in the area needed only a little encouragement to rally to the cause and that a strike against the seat of the American government would do the trick. Philadelphia, it should be noted, held little strategic importance and several negative features that should have given pause. The city was surrounded by a countryside that was largely hostile to the British effort and would only grudgingly offer assistance to an occupying army. The lifeline for supplies and reinforcements was the Delaware River, whose passage could be difficult and dangerous. In truth, Howe was largely motivated by a desire to erase the stain of the earlier losses to Washington at Trenton and Princeton, and believed that taking Philadelphia would accomplish that end. After completing his conquest in Pennsylvania, Howe planned to return to the Northern Offensive. These plans were a well-kept secret. Washington and his lieutenants were confused by the departure of British forces by ship from Sandy Hook on July 23. The fleet carried more than 15,000 soldiers and headed into the Atlantic before turning south. They were not spotted again by American agents for several days, when it appeared that they would enter Delaware Bay. Instead, Howe continued south. His soldiers were packed tightly on the ships and suffered terribly from seasickness and the blazing heat. They entered Chesapeake Bay, sailed to its northern extremity and sent the troops ashore at the head of the Elk River on August 25. Washington and his lieutenants had initially thought that Howe’s target was the Hudson and that his movement out to sea was only a feint. Later they figured that Philadelphia was the object via the Delaware, then fleetingly Charleston and finally Philadelphia again. Washington hurried his army overland into Pennsylvania, where a short series of encounters occurred in the fall of 1777:

Congress fled from Philadelphia on September 19, settling first in Lancaster and at the end of the month at York. Howe entered Philadelphia on September 26, but joined the bulk of his troops stationed a few miles northwest of the city near Germantown. Washington had failed in his effort to prevent the British from taking the American capital city, but he had succeeded in the more important task to keep his army intact. While Howe enjoyed the comforts of Philadelphia, Washington led his forces into winter quarters at Valley Forge in mid-December.