British Invasion from Canada in 1814

As Napoleon's war effort collapsed in 1814, Britain was enabled to give serious attention to the conflict in North America. A 10,000-man army was prepared for a southward push down Lake Champlain, the superhighway of that era. 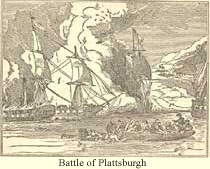 However, in the Battle of Plattsburgh (September 1814) a British fleet on the lake was decisively defeated by American forces under Thomas Macdonough. This defeat halted the invasion because the British soldiers were dependent on the navy for supplies. The American victory also exerted an impact on the peace process. Talks had been ongoing since March, but each side refused to budge. When word of Plattsburg arrived at the talks, the British diplomats began to negotiate more seriously.