The Mercury Space Program was designed to put an American into space. Like the Explorer 1 before it, Mercury followed earlier Soviet successes at similar missions, but it pushed American capabilities to the frontiers of space exploration, which made it possible for the subsequent Apollo missions that took the first Americans to the moon.

The first animal to be launched into space was Laika, a dog that was carried by Sputnik 2 on November 3, 1957. Laika survived approximately four days, before being overtaken by extreme temperatures when the cabin overheated. The first animal on an American craft was a squirrel monkey named Gordo, who survived re-entry after a sub-orbital flight on December 13, 1958, but drowned when the nose cone sank before it could be retrieved. Project Mercury, the United States' first manned space program, began on October 7, 1958, one year and three days after the Soviet Union launched Sputnik 1. The objectives of the program were to orbit a manned spacecraft around Earth, investigate man's ability to function in space, and to recover both the astronaut and spacecraft safely. The first man to visit outer space was Yuri Gagarin. On April 12, 1961, Gagarin piloted the Vostok I mission on a single orbit of the earth in a flight lasting 108 minutes. Celebrated in the Soviet Union as the world's first cosmonaut, Gagarin died in the crash of his MiG-15 on March 27, 1968, while training for a second space mission. 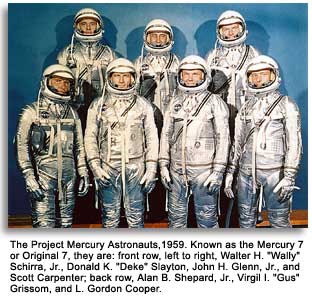 The first United States astronaut was Alan Shepard, whose suborbital flight of the Freedom 7 space capsule on May 5, 1961, marked the first success of the Mercury program. Less than three weeks later, President John F. Kennedy announced a national commitment to put an American on the moon before the end of the decade. Shepard's flight was followed by Virgil I. "Gus" Grissom's flight in the Liberty Bell 7. Also a suborbital flight, the Liberty Bell 7 capsule sank after landing, although Grissom was picked up safely. Grissom was one of the seven original astronauts chosen by NASA for the Mercury program. On February 20, 1962, the United States finally put a man into orbit when John Glenn piloted Friendship 7 on three orbits of the Earth. Scott Carpenter followed him with a similar flight aboard Aurora 7 on May 24. On October 3, Wally Schirra almost doubled the time with a flight in the Sigma 7 and on May 15 and 16, 1963 Gordon Cooper became the first American to stay in space more than 24 hours during his flight on Faith 7. Schirra was the only one to have flown for the all three programs: Mercury, Gemini and Apollo.

Project Mercury achieved its aims. Although its final achievement, keeping an astronaut aloft for more than 24 hours, had been accomplished by the Soviet Union almost two years earlier, the momentum built by Mercury would translate into successes by the Gemini and Apollo programs later in the decade.