In the spring of 1775, most of the Massachusetts Patriot leaders had taken refuge in outlying communities, fearing arrest by British officials. Remaining in Boston were two physicians, Benjamin Church and Joseph Warren, the latter serving as the group’s leader in Samuel Adams' absence. Paul Revere, a trusted messenger, also stayed in the city, tended his business interests and as unobtrusively as possible, kept an eye on the soldiers stationed in the city. Revere became suspicious in mid-April when he noticed that British landing craft were being drawn out of the water for repairs — a clear indication that something was afoot. On the 16th he made a trip to Concord, a key community because it was the temporary home of the Provincial Congress and also a storehouse for militia guns, powder, and shot. He warned the residents there that redcoats were likely to be dispatched in the near future to seize the town’s arms supply. Revere’s warning was taken to heart and the townspeople began to hide arms and valuables in barns, wells, and the neighboring swamps. On his return home, Paul Revere met with Patriot leaders in Charlestown and agreed on a plan to provide notice about the route the British would take to reach Concord. This was a necessary precaution because there was considerable doubt that Revere or others would be able to get out of Boston at the crucial time. Revere agreed to arrange for the placement of signal lanterns in the belfry of Old North Church where they could have been easily seen across the Charles River. If one lantern were displayed, the British would be advancing by land over the Boston Neck, then north and west to Concord. If two lanterns were hung, the redcoats would have chosen to cross the Charles by boat to Cambridge, then west to their target. The former route was unlikely because the soldiers would be clearly visible marching down the Neck, eliminating any element of surprise. The latter plan offered opportunities for concealing movement under cover of darkness and was five miles shorter than the alternative. Revere resumed his activities in Boston, but in the early evening of April 18, he received word from a stable boy that the British were preparing boats for crossing the Charles. In short order, two other sources confirmed the initial report. 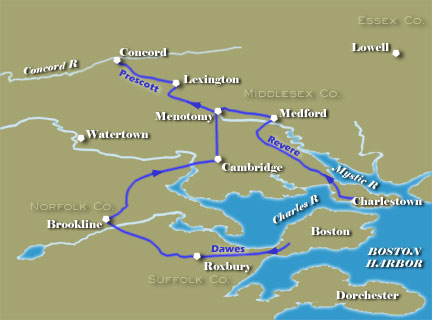 At about 10 p.m., Warren decided that warning had to be given to Sam Adams and John Hancock, who were wanted by British authorities and were likely candidates for the gallows. A young shoemaker, William Dawes, was sent by the land route through Roxbury, Brookline, and Cambridge. As insurance against Dawes’ capture or detention, Revere took the water route out of Boston, but his effort almost failed at its inception. Revere had forgotten cloth rags to muffle the sound of the oars for the passage across the Charles. Any noise created the risk of alerting the crew of the Somerset, a man-of-war at anchor on the river. Legend says the crossing was accomplished when a resourceful boatman acquired a petticoat from his girlfriend and used that garment to wrap the oars. On arriving in Charlestown and gaining his mount, Revere narrowly escaped capture by two British soldiers and had to alter his route to the north. He pressed on to Lexington where he found Hancock and Adams at the home of Jonas Clark. Paul Revere was joined by Dawes, who had successfully slipped past the guards on Boston Neck, and a third man, Dr. Samuel Prescott, a resident of Concord. Before the trio could cover the five miles between Lexington and Concord, they encountered a roadblock manned by British redcoats. Responding to the urgency of the moment, they proceeded to break through. Prescott used his intimate knowledge of the countryside to his advantage and successfully eluded capture - he was the only one of the three to complete the journey and deliver the alarm to Concord. Dawes initially appeared to have escaped his pursuers, but was thrown from his horse and captured. Paul Revere was taken prisoner and during his interrogation deliberately provided greatly inflated numbers of militiamen awaiting the British at Concord. During the ride back to Lexington, Revere and his captors heard shots fire and church bells ring throughout the area — events that gave some credence to Revere’s report of colonial preparations. Fearing for their safety, the British released Revere, but took the precaution of giving him a tired horse to slow his return to Lexington. Paul Revere later joined Hancock and Adams on their retreat into the countryside, but made a frantic return to a Lexington tavern where Hancock had inadvertently left some valuable papers. As dawn broke, Revere departed from the town with the valuable documents in hand and rode past militiamen in the process of assembling. A short time later he could hear shots and see smoke in the distance, the opening round in the struggle for independence. See Map of Revolutionary Boston and Timeline of the American Revolution.