The high water mark of the Spanish Empire's expansion into the New World reached North America. Spaniards commenced to expand into what is now New Mexico and Arizona around 1540. They seized more than 100 Indian pueblos (villages). Spanish soldiers and priests imposed a forced-labor system, encomienda, which resembled slavery, and prevented the Pueblo Indians from communing with their gods. 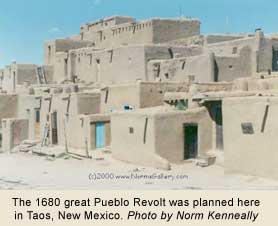 Eventually, the Indians retaliated. Led by Popé, a medicine man from the pueblo of San Juan south of Taos pueblo*, they assaulted several Spanish settlements in August 1680, and achieved overwhelming success thanks to superior numbers – more than 8,000 warriors against fewer than 200 armed settlers. Despite different dialects, they coordinated their attack to occur everywhere at once. They killed 21 Franciscan friars and more than 400 Spaniards. One thousand survivors fled to the governor's palace in Sante Fe, where the Indians laid siege. Deprived of water for several days, the Spaniards managed to escape to El Paso del Norte (now El Paso, Texas). Popé became the ruler of New Mexico. The dynamic leader had engineered the most successful Indian uprising in the history of the West. The Pueblo Indians remained independent for a dozen years and during that time, Popé ordered the eradication of almost every vestige of The Roman Catholic Church. He also penalized Spanish language use and discouraged surnames – and even preached against using the plow, a Spanish tool. Less than a year after Popé's death in 1692, soldiers under Diego de Vargas easily reconquered New Mexico for Spain.