Like Delaware, the early European settlement of New Jersey was a contest between the Dutch and the Swedes. The Dutch West India Company worked to stimulate settlement in the area by granting patroonships, land grants in which the grantee was given proprietary and manorial rights over settlers he sponsored. In 1620, a trading post was established at the site of Bergen, New Jersey, which would later be developed as the first permanent white settlement in the area. Other Dutch enclaves followed at Fort Nassau and at Jersey City. 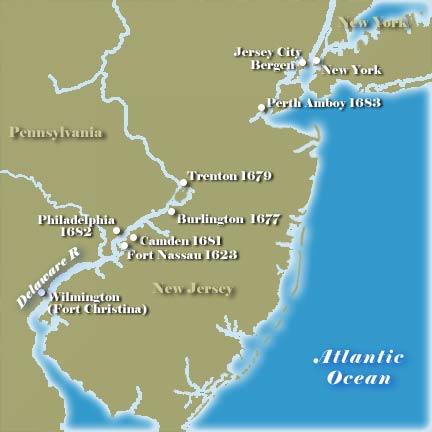 Swedish settlements began in southern New Jersey in 1638, which touched off a rivalry between the two powers over the fur trade. The Dutch under Peter Stuyvesant successfully evicted the Swedes in 1655. The entire region was claimed by England for the Duke of York (later King James II) in 1664. The name New Jersey was introduced, which honored the isle of Jersey in the English Channel. The Duke's claim was passed along to two of his supporters, Lord John Berkeley and Sir John Carteret. These enterprising businessmen offered land at bargain prices and full religious toleration to attract settlers. Confusion soon developed, however. The governor of New York, unaware of Berkeley's and Carteret's proprietorships, assigned lands to several Puritan groups. Tension developed between the Anglican proprietors and the Puritans with the latter refusing to pay rents to the former. In 1674, Edward Byllynge bought out the Berkeley share to establish a Quaker settlement. The colony was divided into two sections that year. The Byllynge Quakers controlled western New Jersey; Carteret owned eastern New Jersey until his death, when control passed to another Quaker organization, the Twenty-Four Proprietors. As things turned out, the Quaker leadership was no more popular with New Jersey society at large than Berkeley and Carteret had been. Ill feeling and even rioting led to the surrender of the Quaker charters to the Queen in 1702, although the actual ownership of land remained with the previous entities. The royal governor of New York served both colonies until public protests resulted in the appointment of a separate official for New Jersey in 1738.

The situation was further complicated by New Jersey's twin capitals at this period. Perth Amboy in the east and Burlington in the west alternated hosting the colonial assembly. East and West, though united on paper into a single colony, developed along dissimilar lines. The East had grown rapidly with the influx of many Scottish and New England Calvinists; the West remained predominately Quaker and saw the development of large estates. The 1740s were years of great tumult, even by New Jersey standards. The religious fervor of the Great Awakening and farmer land riots served to divide an already discordant society. A steady stream of immigrants flowed into New Jersey: Dutch, German, Scots-Irish, Welsh, Swedish and French.