Exploration and Settlement of Connecticut

The first European settlers in the Connecticut area were the Dutch. In 1614, Adriaen Block explored the lands along the Connecticut River. Settlement did not occur until 1633, when a small fort was erected at the site of Hartford, then called New Hope.

In that year, a small party from Plymouth also entered the Connecticut River. The Dutch asserted their claim to the lands, but the Massachusetts group, instead of retreating down river, sailed farther north and established a trading post at Windsor. The Dutch concentrated their main settlement efforts on Manhattan Island and never made a serious effort to colonize Connecticut. The Connecticut Colony The settlements that developed along the Connecticut River in the 1630s were the result of a search for fertile farmland more than a search for religious freedom. Thomas Hooker, a prominent minister in Newtown (Cambridge), Massachusetts, harbored clear democratic leanings, but was not an outspoken dissident. While helping his congregation to find a more promising physical environment, Hooker played by the rules and received permission from the authorities to lead a migration into the west. In 1635 and 1636, nearly 1,000 people moved from the Massachusetts Bay area into lands claimed by the Dutch in the Connecticut Valley. A settlement was established at Hartford, followed later by villages at Wethersfield and Windsor, where a small Pilgrim community already existed. At this time, another group of Puritans set up a trading post at the mouth of the Connecticut. Fort Saybrook was the fruit of the labors of John Winthrop Jr., son of the Massachusetts governor. In 1639, representatives from Hartford, Wethersfield and Windsor met to establish a government for the growing settlements. They drafted the Fundamental Orders of Connecticut, sometimes cited as the first constitution written in America. The settlers emulated many of the practices used in Massachusetts, but placed additional limitations on the governor’s powers and instituted more liberal voting standards. The Connecticut Colony grew over the years and by the middle of the 17th century incorporated Fairfield, Farmington, Middletown, New London, Norwalk, Saybrook and Stratford. The New Haven Colony 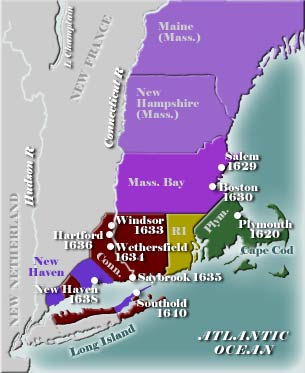 The Rev. John Davenport and Theophilus Eaton, an English merchant, visited Massachusetts in 1637 to establish a new settlement. They found the Bay Colony lacking in the strict enforcement of moral standards and looked elsewhere for a new opportunity. In 1638, they founded a settlement at New Haven on Long Island Sound, a community intended to be both a trading post and a Bible Commonwealth. Commercial success was slow to occur, but the religious aims were largely met, at least in the early years. Puritanism's grip was strong in New Haven and the vote was restricted to church members, which rendered it considerably less democratic than the Connecticut colony. Other settlements along the Sound soon fell into the New Haven orbit, including Branford, Guilford, Milford, Stamford and Southold. Security was a major concern of the four major New England colonies — Massachusetts, Plymouth, Connecticut and New Haven, all of whom refused to deal with independent-minded Rhode Island. The French, Indians and Dutch posed threats to these colonies. In 1637, Connecticut was engulfed in the Pequot War, which resulted in that tribe's virtual extermination. The Connecticut Colony and New Haven existed as separate political entities until 1662, when a charter was granted to the Connecticut Colony. It included a 73-mile-wide swath from Rhode Island to the Atlantic Ocean. Initially, New Haven was not pleased about its absorption by a larger neighbor, but they were formally merged in 1665.