The Virginia Company of Plymouth, a group of English merchant investors, had failed to establish permanent colonies in the northern reaches of what was then known as Virginia.

The stockholders' spirits were further dampened when they noticed that their chief rival, the Virginia Company of London, had established a settlement at Jamestown, where a lucrative tobacco economy began to develop in the late 1600s. Sir Edwin Sandys, a major figure in the Plymouth group, hoped to salvage some of his investment by convincing James I that he should allow a group of religious dissenters to settle on the company’s lands.

Earlier, in 1608, group of religious separatists from the English town of Scrooby had moved quietly to Amsterdam and Leiden, Holland, in search of religious freedom. Their journeys earned them the name "Pilgrim."

Despite their enjoyment of religious toleration, the separatists were denied entry to the lucrative Dutch guilds and found it hard to support themselves. They also were concerned about the fact that their children were growing up as young Dutch people and not adhering to their parents’ religious dictates.

Separatist leaders secured a land grant from Sandys in 1620, and embarked in the ship Mayflower for the New World in September. They arrived in November initially at Provincetown Bay and later settled at what became Plymouth. 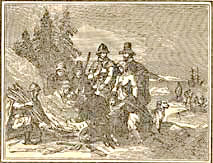 The Pilgrims had intended to settle near the mouth of the Hudson River, but had been blown off course in stormy weather. Since they were well outside the confines of Virginia, the colonists sought to legitimize their venture by forming the Mayflower Compact.

The Pilgrims established their first home in an empty Indian village where the inhabitants had recently been wiped out by an epidemic. With typical religious certainty, the leaders concluded that God had cleared the site for his chosen people. During the first winter, adverse weather conditions and lack of food took a heavy toll among the original 102 colonists.

In 1621, the Pilgrims concluded a peace treaty with chief Massasoit of the neighboring Wampanoag tribe. The natives provided critical instruction on adaptation to the new environment, particularly in the cultivation of corn. That fall, following a successful harvest, the Pilgrims feasted with the Wampanoag in the first Thanksgiving celebration.

The Plymouth economy developed around trade in fish and furs. The sandy, rocky soil had made agriculture difficult, but basic crops were grown successfully.

Plymouth was never a prosperous settlement, but the religiously faithful were content to be ignored by English officials and left to direct their own affairs.

Plymouth remained a separate political entity until it was absorbed by the Massachusetts Bay Colony, in 1691.