As a means of generating income for colonial administration, Parliament in 1767 passed the Townshend Acts, which placed duties on paper, lead, paint, and tea imported into the colonies. 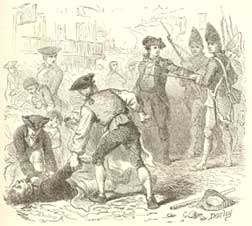 A boycott engineered by the Americans angered the imperial authorities. Customs officials repeatedly asked for military backing, in the hope that a show of force would enable them to collect duties from reluctant colonists. In October 1768, those pleas were answered and the first soldiers were posted in Boston. Eventually, about 4,000 redcoats, equal to one-fourth of the city's population, were deployed. Bostonians resented the presence of "foreign" soldiers in their city, but many common workers shared an additional concern. The British soldiers were so poorly paid that many had to find part-time jobs in order to meet their basic needs. In so doing, the redcoats were taking jobs needed by the colonists. Incidents between citizen and soldier were frequent. The most incendiary was the so-called "Boston Massacre" of March 5, 1770. On that day, a single sentry was on duty at the Customs House on King Street, present-day State Street. An argument broke out between the soldier and a local merchant, who was struck with the butt of a musket during the confrontation. A crowd assembled quickly and began pelting the sentry with a variety of materials — stones, oyster shells, ice, and chunks of coal. Tensions were further heightened when the bells of the city’s churches began to toll, the traditional means of summoning help in fighting fires. Reinforcements under Captain Thomas Preston were rushed in to relieve the beleaguered sentry. The mob taunted the soldiers, daring them to fire, while remaining somewhat secure in the widely held knowledge that the soldiers could not discharge their weapons within the city without prior authorization from a civil magistrate. At this juncture, someone in the crowd hurled a wooden club at the redcoats. Private Hugh Montgomery was struck and fell to the ground. As he regained his footing, someone — Montgomery, another soldier, or someone in the jeering mob — yelled, “Fire!” The redcoats did so. Preston, who clearly had not given the order, ended the firing and tried to restore order. By that time, however, three colonists lay dead and two others mortally wounded; six others would later recover from their wounds. The Boston Massacre was, of course, not a “massacre,” in the classic sense. Samuel Adams and other propagandists, however, immediately capitalized on this incident, using it to fan colonial passions. Paul Revere assisted the effort by issuing one of his most famous engravings, possibly plagiarized, depicting the American version of the event. In response to these tensions, Lieutenant Governor Thomas Hutchinson ordered that the British soldiers be withdrawn to Castle Island, giving the colonists a much-celebrated victory and indicating the rudderless nature of British policy. A combined funeral for the slain was held a few days later and the procession was said to have been joined by 10,000 people. Later, 35-year-old John Adams risked the disapproval of his friends and neighbors by defending the British soldiers in a highly publicized trial. Historians tended for many years to regard the Boston Massacre as a watershed event. American opinion was radicalized by skillful propaganda, which moved many former moderates to outspoken opposition to British policies. More recent scholars, however, have found evidence of a more discerning Boston public that was appreciative of British restraint and disapproving of provocative mob actions. Evidence of the latter view was found in the relative quiet that descended on the community after the funeral. Further unpopular British actions would have to occur before a larger portion of the populace would embrace the radical view.

NOTE: According to most accounts, the first colonist to fall from the British volley was Crispus Attucks, a mulatto sailor. Little is known about his life, but some evidence exists indicating that he may have been a runaway slave nearly a quarter century earlier. Attucks' body lay in state for several days in Faneuil Hall, then was buried in a common grave with the other four victims.