Construction began on Fort Beauséjour in 1751 as a French reaction to the English presence at Fort Lawrence across the Missiquash River. The new structure at its key location guarded the border between French Acadia and British-occupied Nova Scotia, which is today New Brunswick. During the French and Indian War, combined British and American forces under Robert Monckton captured Fort Beauséjour without resistance, an event that provided the British with control of the strategic Chignecto Isthmus. 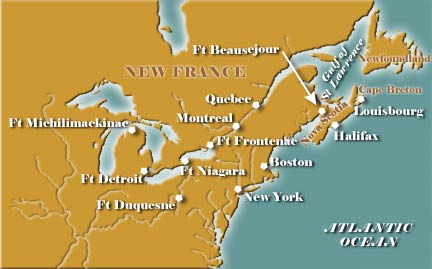 Nearby Acadians, French-speaking residents, hated the British and often mistrusted the French; they refused loyalty oaths to either side. The British were particularly fearful of Acadian support for the French cause in the war and attempted to blunt that possibility by dispersing a portion of that population. Fort Beauséjour served as a staging area for that much maligned event. The fort was renamed Fort Cumberland by the British, who would later repulse American attacks during the War for Independence. The British maintained the fort until 1835. Since 1926, the site has been maintained by Parks Canada. See French and Indian War Timeline.
See also Indian Wars Time Table.